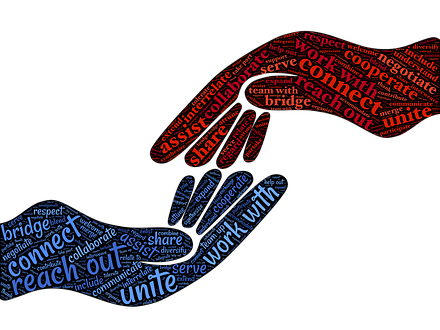 THE MAGNIFICENT POWER OF TEAMWORK

To begin with, let’s look into the definition of our key word ‘teamwork’. Teamwork as defined by the English Dictionary is said to be the ‘cooperative work done by a team (especially when it is effective)’ I am so in love with the bracketed statement. The Oxford Dictionary puts it as ‘the combined effective action of a group’. From the two given definitions, we can compile that TEAMWORK has to do with:

Before we go further, what exactly is a team? Simply put, a team is a number of persons associated together in any work aiming at a certain goal. Now, here is it when we have a group of persons coming together to have a discussion on a particular work to be done and how to do it… if at the end of the meeting, they don’t come into an agreement [maybe because each member feels his/her opinion concerning how to go about the work is the best and can’t submit to any other person’s idea], they will end up not doing the work together but if at all they end up carrying it out together, there might be cases of lapses, which could lead to conflict and obviously a lesser rate of efficacy. That’s to say, in every teamwork that desire a job well done, there must be harmony of opinion.

9 And Moses said unto Joshua, choose us out men, and go out, fight with Amalek: to-morrow I will stand on the top of the hill with the rod of God in my hand.

10 So Joshua did as Moses had said to him, and fought with Amalek: and Moses, Aaron, and Hur went up to the top of the hill.

11 And it came to pass, when Moses held up his hand, that Israel prevailed; and when he let down his hand, Amalek prevailed.

12 But Moses’ hands were heavy; and they took a stone, and put it under him, and he sat thereon; and Aaron and Hur stayed up his hands, the one on the one side, and the other on the other side; And his hands were steady until the going down of the sun.

13 And Joshua discomfited Amalek and his people with the edge of the sword.

It’s the story of the fight or battle between team Joshua and team Amalek… the story goes that team Joshua won whenever Moses put his hands up, and the opponents won when Moses’ hands were down. It continued that way until Moses’ hands were weary that he no longer could hold it up. The two other men [Aaron and Hur] who were not on the battleground but were with Moses on the hilltop, had an idea which really helped in making their team win. They didn’t just keep it to themselves but they acted on it instead of watching Moses like the battle was Moses’ alone. What was it they did? you will see that in verse 12. A stone was put under him so he could sit and it didn’t just stop there, each one stood one on one side of Moses and held his hands up. Hope you can see the scenario clearly? Now with that, it was documented clearly that Joshua overcame the Amalekites. What do you think would have happened if Aaron and Hur had not held Moses’ hands up? Would there have been a miracle? Do you think team Joshua would have still won? I doubt so, but for the help of those two men, they did win. That’s the power of teamwork. Have you also thought of if Moses had declined or rejected their offer and was maybe claiming he’s the anointed one and can do it all by himself? That would have been a great downfall for team Joshua. This brings us to another significant point, even as I draw a conclusion…for every efficaciousness of a teamwork, pride must be kept aside. It really doesn’t matter who is doing the most work, what should be the major concern in the minds of every team member should be on ‘reaching the goal’.

Never forget the saying ‘two are better than one, for when one falls, the other lifts him up’.

Have a blessed day

Previous LIVING A LIFE OF IMPACT
Next STUMBLING BLOCKS

Exactly what are the Best Antivirus security software Programs?

Look inside your closet to check you have something to sell. A payday cash loan …